Jul 14, 2022 • Julia Rock
One of the candidates, Haley Stevens, has a history of doing gig companies’ bidding and trying to quash worker protections.

A win by a conservative Democrat in a hotly contested primary in Michigan next month could have implications for workers nationwide, especially those in the gig economy.

Due to redistricting, two sitting Democratic lawmakers — progressive Rep. Andy Levin and the more conservative Rep. Haley Stevens — are vying to see which will represent Michigan’s new 11th congressional district. While the Levin-Stevens race parallels other standoffs this midterm cycle between the left and corporate wings of the Democratic Party, this particular contest could have especially important consequences for workers, given the two lawmakers’ positions on the powerful House Committee on Education and Labor.

In 2019, Stevens attempted to add an amendment to the Democrats’ signature labor legislation — the Protecting the Right to Organize (PRO) Act — that closely mirrored the demands of gig companies to exclude their workers from being classified as employees, and as a result, from key state and federal labor protections.

Her amendment, which was backed by 18 other conservative Democrats on the Education and Labor Committee, would have commissioned a government study on provisions similar to those in Proposition 22, the controversial 2020 California ballot measure backed by Uber and Lyft to classify their drivers as independent contractors.

Proposition 22 was struck down by a California court last year, and a related ballot measure in Massachusetts was blocked by a state court last month. 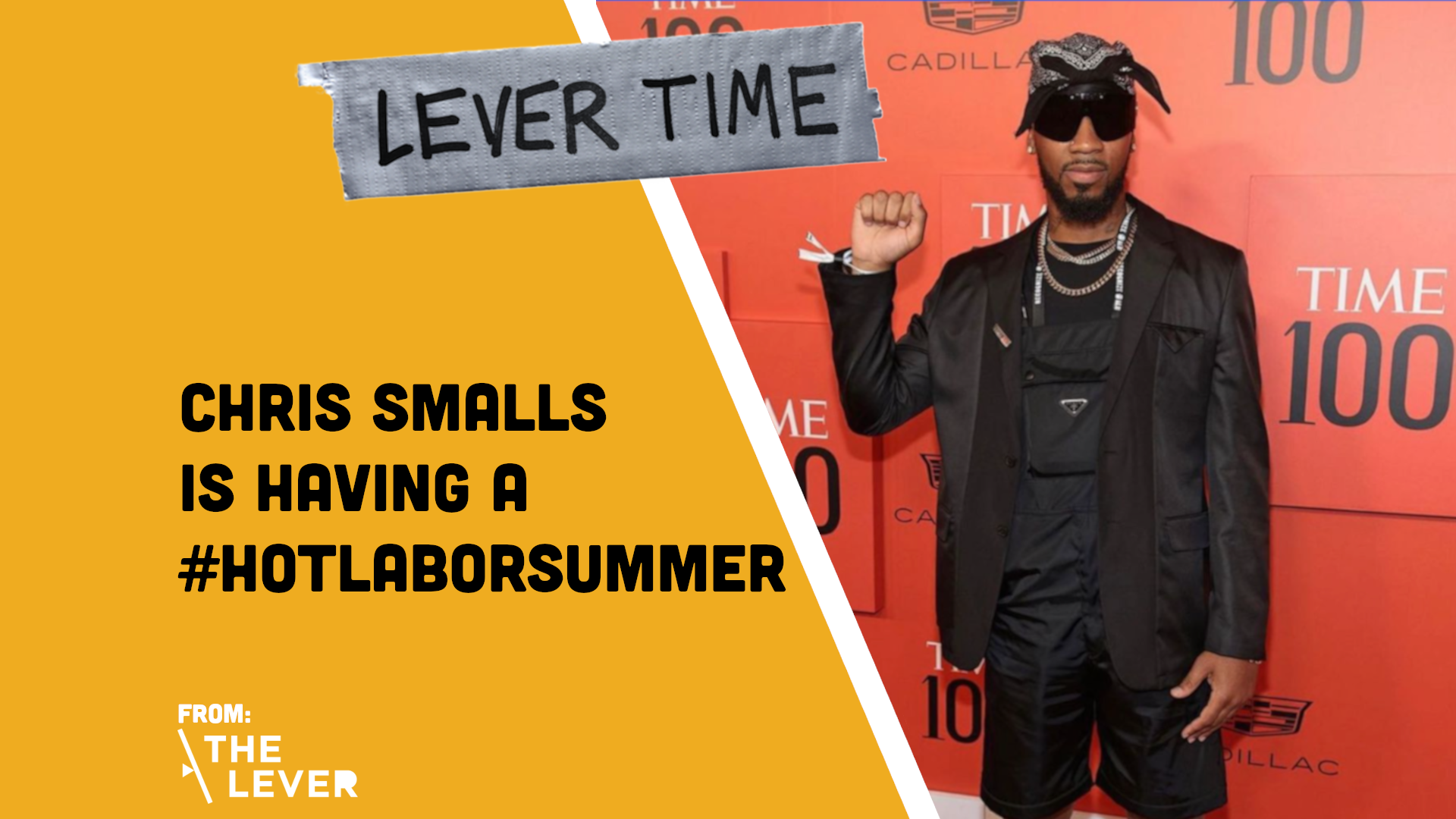 NEW PODCAST: Chris Smalls Is Having A #HotLaborSummer

On this week’s Lever Time: David explores how Joe Biden can salvage his presidency; he speaks with Lucas Kunce, who’s running for a Senate seat in Missouri; and The Lever’s interview with Amazon Labor Union president Chris Smalls.

Stevens’ amendment “reflects a message that gig companies like Uber have been putting out for many years now, which is that they would like a new employment classification for gig workers, for those workers to be organized into sector-wide organizations that engage in collective bargaining, and that these workers have portable benefits that are not specific to one employer,” Matt Bruenig, founder of People’s Policy Project, told The Lever.

This history and other past moves suggest Stevens, who boasts powerful endorsements from the likes of Hillary Clinton and millions in support from groups tied to the pro-Israel advocacy group American Israel Public Affairs Committee (AIPAC), could be a key ally for big corporate interests if she wins.

While both Levin and Stevens both currently sit on the House Labor and Education Committee, after the election, only one of them will remain. If Republicans take the House, as they are expected to do, Stevens could provide a key vote on attempts to exclude gig workers from employee classification.

Stevens’ office did not return a request for comment.

In January 2019, Stevens arrived in Congress and was appointed to the House Committee on Education and Labor. Within her first year, she wrote an amendment backed by gig companies and, alongside more than a dozen fellow corporate Democrats, attempted to attach it to the party’s signature union-rights legislation.

Her proposed amendment to the PRO Act called upon the Government Accountability Office (GAO) to put out a report studying the impacts of the so-called “ABC test.”

The ABC test created by the PRO Act would change how the National Labor Relations Act (NLRA) defines an employee. Specifically, the ABC test would require workers to be considered employees — not independent contractors — with a few exceptions, one of which is that “the service is performed outside the usual course of the business of the employer.”

That part of the test “is likely to cause gig workers to be classified as employees for the purposes of the NLRA,” Bruenig explained. “This means they would be able to organize into unions under the NLRA and receive the various other protections of the NLRA.”

Stevens’ amendment essentially spells out what has long been gig companies’ response to this classification. It calls on the GAO to consider “appropriate bargaining units for workers who are not traditional full-time employees of an entity and who perform work not in connection with traditional full-time employment, including sectoral bargaining for such workers,” “portable work-related benefits for such workers,” and “the feasibility of a new employee classification for those performing work mediated by an electronic platform.”

In California, Proposition 22 was a similar response to an ABC test that was passed by the state legislature in 2019.

The portable benefits idea was backed by gig companies in California that faced the threat of having to classify their workers as employees, which would have entitled them to benefits such as Social Security and the right to form unions, as well as other basic labor protections.

The model is essentially a separate social safety net for gig workers, but the benefits are likely to be inferior to public benefits. Most versions of portable benefits — such as the one proposed in Prop 22, and more recently in versions proposed in Washington, New York, and Massachusetts — would require workers to pay into a fund in exchange for benefits including those analogous to workers’ compensation, unemployment, and retirement.

In 2020, Uber CEO Dara Khosrowshahi laid out the idea in a New York Times op-ed: “I’m proposing that gig economy companies be required to establish benefits funds which give workers cash that they can use for the benefits they want, like health insurance or paid time off. Independent workers in any state that passes this law could take money out for every hour of work they put in. All gig companies would be required to participate, so that workers can build up benefits even if they switch between apps.”

Gig companies support the idea because it’s cheaper than paying into Social Security, unemployment, or other safety net benefits that employers pay into when their workers are classified as employees, and means they don’t have to comply with the labor laws that come alongside employee classification.

Industry officials have said that classifying gig workers as employees could increase their costs by 20 to 30 percent.

“Gig companies are trying to use this concept of portable benefits as a release from misclassification liability,” Marshall Steinbaum, an assistant economics professor at the University of Utah, told The Lever.

Gig companies need skilled workers, but training them would require them to classify those workers as employees. By including training programs in portable benefits funds, companies can have access to a trained workforce without having to pay the premiums that come along with employee classification.

“Employers would love to be able to get their gig workers trained as much as their employees, but they don’t because it triggers the possibility of misclassification liability. They are willing to throw in a few pennies for portable benefits, as long as they can keep a two-tier workforce, and avoid paying into programs like Social Security,” Steinbaum added.

In 2019, Stevens separately co-sponsored legislation to create a pilot program within the Department of Labor to provide portable benefits to gig workers. A similar bill was introduced in this Congress, but Stevens is not listed as a cosponsor.

Sectoral Bargaining In The Gig Economy

Stevens’ amendment also included the gig company idea to combine portable benefits with a type of sectoral bargaining, where gig workers can form unions across sectors rather than with individual companies. However, Steinbaum and others have warned that this sectoral bargaining proposal is a red herring, because workers classified as independent contractors wouldn’t actually have a seat at the table.

He and a group of academics wrote a blog post on the matter in which they explained, “The context in which sectoral bargaining (or “multi-employer bargaining”) makes sense is one in which employers are atomized and bringing any one of them to the table is irrelevant to the status of workers when any one employer has relatively little influence over labor standards. But that is not a factual interpretation of the ride-hailing or food delivery markets. Instead of atomized subcontractors or suppliers, there are a few dominant employers with a great deal of unilateral power over labor standards.”

The CEO of Lyft touted sectoral bargaining, for example, after Proposition 22 passed in California.

Indeed, Postmates (now owned by Uber) put out a statement after the PRO Act passed the House praising the sectoral bargaining amendment. “In particular, we applaud [Stevens’ amendment to] H.R. 2474, an amendment commissioning a study on how to improve worker voice in the on-demand sector, as a bridge to thinking about worker power and portable benefits for a mobile 21st century workforce,” noted the statement. “We hope more will join the call for further collaboration and innovation, and we applaud Rep. Stevens’ leadership on this incredibly important issue.”

After the PRO Act first passed the House in February 2020, Stevens said that she would continue to explore the portable benefits idea, even though the amendment hadn’t been included in the bill.

“Another amendment I had introduced was not made in order, but it would have asked the GAO to explore the deployment of portable benefit  systems and the feasibility of a new employee classification for this gig economy and their employees,” she said in a speech on the House floor. “We will continue exploring these alternative work models that ensure a strong set of benefits and protections for workers, while allowing them to retain the independence and flexibility they want.”

Splitting With Democrats On Labor Issues

Stevens has also split with her party on issues related to raising the minimum wage to $15 an hour, despite touting her support for a higher minimum wage on the campaign trail, as The Intercept has reported.

During Stevens’ first days in Congress, Rep. Bobby Scott (D-VA), the chair of the labor committee, introduced the Raise the Wage Act, which would have raised the minimum wage to $15 an hour by 2025 and eliminated the subminimum for tipped employees.

While Stevens co-sponsored the legislation, she in 2019 split with every other Democrat on the labor committee to vote in favor of two Republican amendments to limit the scope of the law.

The first amendment, the so-called “small business survival” amendment, would have excluded companies that employ fewer than 10 people or whose annual sales are less than $1 million from being covered by the minimum wage law. That amounts to nearly 80 percent of businesses in the U.S., which together employ tens of millions of workers.

The second amendment would have nullified the legislation if an independent study found that it would lead to half a million jobs or more being automated.

Levin, meanwhile, was one of the House’s strongest advocates of including a $15 minimum wage in the American Rescue Plan. After the Senate parliamentarian advised that a $15 minimum wage could not be passed through the budget reconciliation process, Levin joined 23 other members of the House to call upon Vice President Kamala Harris to ignore the parliamentarian and move to keep the provision in the bill.

How Biden and Buttigieg Could Deliver Sick Leave To Rail Workers

“Our Life Only Functions Around The Railroad”

Join Us To Discuss The Railroad Contract & Georgia Runoff Election

LEVER WEEKLY: All They Had To Do Was Nothing