Wall Street’s most closely guarded and lucrative secrets may finally become public, if New York Democratic lawmakers pass a new bill requiring financial firms to show what they are doing with hundreds of billions of dollars of Americans’ retirement savings.

In the two decades since public pension systems began funneling workers’ money into those high-risk, high-fee investments, states and cities have concealed the contracts governing the investments of the retirement savings of millions of teachers, firefighters, first responders, and other government workers. If the New York legislature’s Democratic supermajority passes Kim’s bill, for the first time it would open up those contracts to public scrutiny.

“Portfolio managers charge our state exorbitant management fees while underperforming the market,” Kim said about his bill. “To add insult to injury, these investments are accelerating the climate crisis and destroying the American healthcare system. The pension holders have a right to see what their hard-earned money is being invested in, and legislators have a right to review whether these funds are pushing us further into climate catastrophe and destroying public goods.” 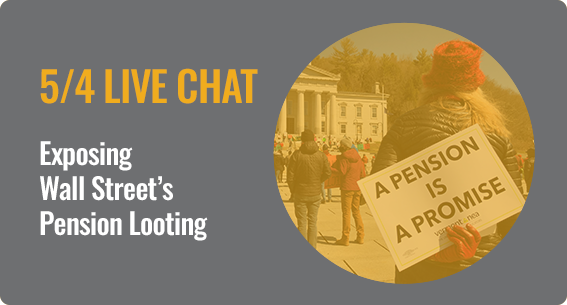 The battle over transparency threatens one of Wall Street’s most essential streams of cash. In all, more than $1.4 trillion has been funneled from public pension funds into “alternative investments” like private equity, hedge funds, and real estate . Assuming the industry standard fee model, this payout generates at least $40 billion annually in fees for an industry that is already comprised of some of the wealthiest people on the planet. That group includes people like major Trump ally Stephen Schwarzman, who once compared Obama’s tepid effort to modestly increase taxes on private equity firms to the Nazi German invasion of Poland.

Kim’s initiative comes on the heels of news that one of Wall Street’s most famous private equity firms used New York pensioners’ savings to finance a buyout of a major group home company where bottom-line driven management led to deaths and countless injuries among vulnerable people with disabilities.

That revelation followed unfolding scandals at multibillion-dollar pension systems in Washington, D.C. and Pennsylvania, whose pension investments in high-fee Wall Street firms are now being scrutinized by law enforcement agencies. In the latter case, Pennsylvania State Senator Katie Muth, also a Democrat, has been forced to sue to gain access to contracts and other alternative investment documents, even though she is a board member of the Pennsylvania teachers’ retirement system.

A Cone Of Secrecy

That push to give Wall Street even more control over retirement funds includes efforts in New York City. There, Comptroller Brad Lander, a Democrat, has championed legislation to give himself more authority to increase in alternative investments — after he received generous campaign support from finance industry donors. Lander declined to answer questions as to whether he would support releasing the alternative investment contracts for the funds he oversees  or take other steps to increase transparency.

Because New York’s $279 billion system is so large and does business with so many firms, Kim’s legislation would effectively break the nationwide secrecy regime concealing Wall Street contracts at state and local pension systems. That cone of secrecy was created in the early 2000s, when Wall Street lobbyists convinced nearly every state in the country to exempt the contracts from public records laws.

Since then, Wall Street firms have pressed state officials to deny public records requests even for details of the ever-higher fees being paid to them by pension systems.

The finance industry has argued that the contracts are trade secrets and that disclosing them — even to the retirees whose money they govern — would give competitors an edge.

“The argument that [agreements] should be accessible to the public is akin to demanding that Coca-Cola publish its famous and secret soda recipe,” wrote private equity industry lobbyist Steve Judge in 2014. “Like Coke’s secret recipe, [agreements] contain proprietary and commercially sensitive trade secret information that, if disclosed, could undermine a private equity fund’s ability to invest and generate high returns for its limited partners.”

Those arguments have continued to win the day.

In Kentucky, the financial industry killed legislation that would have required Wall Street firms to disclose fee and contract information, and has stalled a class action lawsuit that would require two of the largest private equity firms to disclose their business arrangements with the state’s beleaguered pension fund. Similarly, after questions were raised about Colorado’s alternative investments in 2018, pension officials there fought off a push for contract transparency, only allowing legislators to view investment details behind closed doors — but not allowing retirees or members of the public to see those details.

For their part, transparency advocates say that there is no compelling reason to hide these agreements from the public. In the past, nearly all contracts with alternative investment management firms were public records — but Wall Street lobbying changed all of that by aggressively pushing state legislators to limit disclosures.

“In the past 20 years, thanks to what amounts to a conspiracy on Wall Street, lobbyists have gone through every city, county, and state and basically pushed through secrecy agreements that eviscerate long standing public records laws,” said Ted Siedle, a former attorney with the Securities and Exchange Commission.

In response, said Siedle, “Wall Street has made a fortune in hidden and secret fees and conflicts of interest.”Siedle’s concerns were echoed by Eileen Appelbaum, the co-director of the Center for Economic and Policy Research.

“What we want is maximum transparency so the public can see very clearly what they're getting,” Appelbaum said. “How good are the contracts? What are the fees, expectations in terms of returns? They’ve had jet planes, all kinds of things that the managers were charging the investors. If they have to make those contracts public, then there’ll be added pressure on them to make it clear what expenses are being paid. That's why they don't want them public.”

Where There’s Smoke, There May Be Fire

Based on the limited public filings currently issued by major Wall Street firms managing billions of dollars of pension money, Kim’s legislation, if successful, could expose eye-opening behaviors by the financial operations involved.

For example, the firms already admit that they will give preference to some investors over others. Claren Road Asset Management, an affiliate of the Carlyle Group, says in an SEC filing that “its affiliates and its personnel may give advice or take action for their own accounts that may differ from, conflict with or be adverse to advice given or action taken for Clients.”

In effect, such provisions – which are widespread throughout the financial industry – mean well-connected friends and family of senior alternative investment executives could get preferential treatment over ordinary public pension fund investors in the same investment vehicles.

Contracts obtained by The Lever have also shown that managers will demand a waiver of jury trials, and that they indemnify senior executives from liability to the fund for all activity “that is not in material violation of this Agreement and does not constitute fraud, gross negligence, or willful misconduct.” Such language means that the manager is insulated from nearly all instances of misconduct that is provable in a court of law, as the “outright fraud” or “willful misconduct” legal standards are very high bars to meet.

Siedle says that he has even read contracts that waive the traditionally sacred obligation of the manager to act in the best interests of their clients.

New York has been at the center of corruption allegations relating to shadowy alternative investments. Former city comptroller Alan Hevesi, for example, was convicted of selling access to the pension fund to private equity firms including the Carlyle Group..

Despite current comptroller Tom DiNapoli’s pledge to complete an ethics overhaul the department, major ethical lapses have occurred on his watch. The pension system’s head of fixed income from 2014 to 2016, Navnoor Kang, was sentenced to prison in 2018 for accepting bribes from brokers, after he had improperly accepted gifts from vendors at his last job.