Sep 16, 2022 • David Sirota & Julia Rock
Dems touting a bill to expand fossil fuel pipelines have not released any emissions projections showing what the bill would do to the climate.

As heatwaves and droughts scorched the country this summer, Democrats in Washington sold their Inflation Reduction Act (IRA) to voters as a tool to combat climate change. To deflect questions about why fossil fuel companies were celebrating the bill, party leaders and their media acolytes pointed to studies — one by an institution with ties to fossil fuel giants — asserting that even with its provisions expanding oil and gas development, the legislation would result in a huge net reduction in greenhouse gas emissions.

However, those studies did not take into account an agreement that Senate Majority Leader Chuck Schumer (D-N.Y.) says was an integral part of the IRA: Legislation to accelerate the construction of fossil fuel pipelines, which data show drive planet-warming emissions.

Now, as Senate Democrats are moving to pass that pipeline side deal — and as some liberal pundits insist climate activists should halt their criticism of the agreement — lawmakers appear to be flying blind about the legislation’s environmental  impacts.

Congressional staffers and environmental groups tell The Lever that they have seen no reliable analyses comprehensively quantifying the climate effects of the initiative to expand oil and gas infrastructure, even though the bill is now moving forward, and even though a draft version of the pipeline bill has been in the public domain since early last month, before the IRA even passed.

“Our modeling of the IRA was based on the final legislative text, and there was no permitting reform text to refer to so it was not explicitly considered,” John Larsen, partner at the consulting firm Rhodium Group, told The Lever. The Rhodium Group’s projections were widely cited as proof that Democrats’ IRA would significantly reduce emissions.

We're building a reader-supported investigative news outlet that holds accountable the people and corporations manipulating the levers of power. Join our fight by becoming a free or paid subscriber today.

The pipeline agreement, which is backed by the Biden administration, was originally negotiated between Schumer and Sen. Joe Manchin (D-W.Va.) — respectively Congress’s top recipients of utility and fossil fuel industry campaign cash.

Though the final text of the measure is still secret, the leaked draft — which was emblazoned with the watermark of a powerful oil and gas industry lobbying group — elucidated the broad strokes of the deal: weakened environmental laws and expedited timetables to steamroll any opposition or delay when fossil fuel companies want to build pipelines through fragile ecosystems and local communities.

And yet, the same Democratic lawmakers who waved around emissions projections to justify passage of the IRA have produced no similar estimates about the emissions implications of the pipeline deal that Schumer acknowledges was “part of the IRA.”

“The fact that emissions projections for Schumer’s side deal have not been discussed either in private or in public point to the reality of what’s at stake here,” said Jim Walsh of the environmental group Food and Water Watch. “Schumer and Manchin’s deal is not talking about clean energy; it’s a fossil fuel payday. The leaked draft specifies the fast-tracking of 19 fossil fuel-related infrastructure projects. Any effort to spin that increased pollution as emissions reduction would be just that — spin.”

“Pipelines Are The Vast Majority Of The Emissions”

Environmental groups say speedy approvals for pipelines and other fossil infrastructure could undercut projected emissions reductions from other parts of the IRA.

“Just looking at a couple pipelines and our public lands gives you a sense of how much damage this could do,” said Jamie Henn, a co-founder of 350.org and director of Fossil Free Media, which is backing a coalition of 1,200 groups opposing the pipeline deal. “The Mountain Valley Pipeline is estimated to have the lifetime emissions of approximately 25 coal-fired power plants, the Line 3 pipeline that Biden refused to stop is estimated to have the equivalent emissions of 50 coal fired power plants, and one quarter of U.S. emissions since 2005 have come from public lands, which Manchin and the GOP want to open up for more drilling. Start adding these up and we’re talking serious emissions.”

The link between pipelines and emissions was spotlighted in a recent study from researchers at Michigan Technological University, who found that pipelines account for nearly half of the country’s carbon dioxide emissions, because the infrastructure accelerates the distribution and use of fossil fuels.

That is in addition to emissions from natural gas pipeline leaks of methane, which is a particularly potent greenhouse gas. Such pipeline leaks are releasing millions of metric tons of methane every year, according to government data cited by the Environmental Defense Fund.

What’s more, congressional investigators earlier this year found that “oil and gas companies have internal data showing that methane emission rates from the sector are likely significantly higher than official data reported to [the Environmental Protection Agency] would indicate.”

“Allowing any additional fossil fuel infrastructure like pipelines that we put in place locks you into additional fossil fuels,” Michigan Tech engineering professor Joshua Pearce told The Lever. “The pipelines are [responsible for] the vast majority of the emissions within the United States. To build more of them is really sacrificing the future.”

Studies Touting IRA Did Not Account For The Pipeline Deal

That study — touted by other Democrats — was in part based on an earlier analysis crafted jointly with Michael Greenstone, the Milton Friedman Distinguished Service Professor in Economics at the University of Chicago, and formerly the chief economist on President Barack Obama’s Council of Economic Advisors.

Similarly, the White House released a rosy analysis of the bill’s climate impacts, based on the Rhodium study, as well as similarly glowing analyses from researchers at Energy Innovation and the REPEAT Project at Princeton University, whose Net-Zero research project accepts funding from fossil fuel giants ExxonMobil and BP. 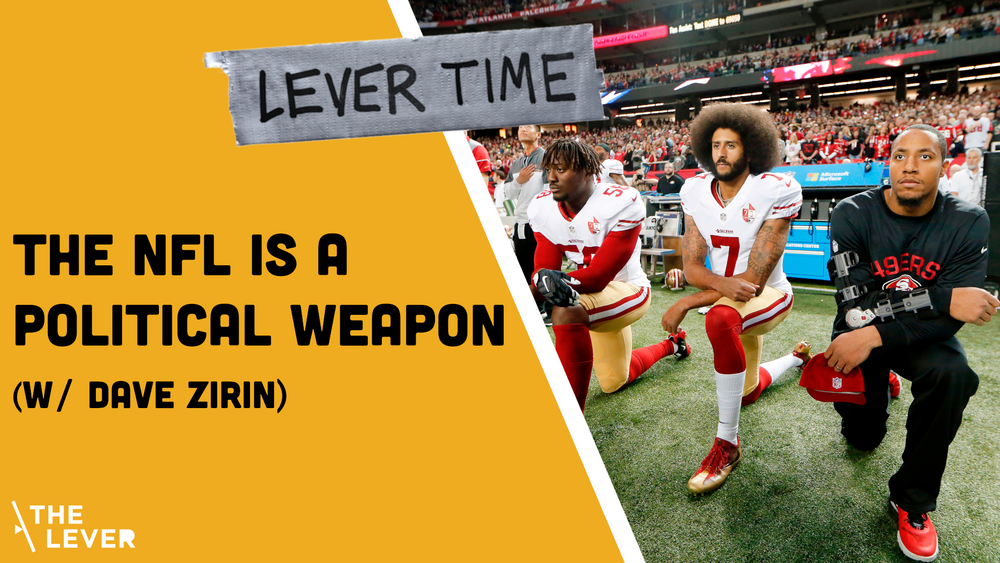 🎧 LEVER TIME: The NFL Is A Political Weapon

In the new episode of our free weekly podcast, we sit down with political sportswriter Dave Zirin to discuss the history of the NFL’s political influence on American culture.

The studies were widely cited throughout the national media as proof that the bill will reduce emissions by 40 percent — even though they acknowledged that current U.S. policy (essentially doing nothing more than the status quo) would reduce emissions by up to roughly 30 percent. The studies’ assumptions were also based in part on unproven carbon capture technologies.

Nonetheless, the analyses were weaponized to snuff out criticism from environmental groups concerned about how the IRA and its accompanying legislative arrangements could expand oil and gas development.

“It really is a fundamentally game-changing piece of legislation,” said study author Jesse Jenkins of Princeton’s Andlinger Center for Energy and the Environment, which recently renewed its funding deal with Exxon. “If you’re an oil company thinking about the market ahead, sure, some additional leases are offered. But the broader market trends just shifted against the value of developing the oil and gas.”

But while Jenkins told the Washington Post he and other researchers consulted with congressional staff about the emissions implications of the Inflation Reduction Act, it does not appear that there has yet been similar emissions scrutiny of the IRA side-deal initiative to accelerate — and reduce the expense — of fossil fuel pipelines.

“Permitting and siting reform is inherently challenging to model,” said Larsen of Rhodium, which in 2020 inked a deal to consult for the Wall Street giant BlackRock as it continued to invest in fossil fuel pipelines. “When we see actual legislative text from Senate leadership, we plan to consider whether our tools are well-suited to capturing the effects of this bill.”

Jenkins and Energy Innovation did not respond to similar questions from The Lever about whether the groups had researched the emissions implications of accelerated pipeline development.

Currently, federal lawmakers are forced to rely on climate projections from outside groups, because their own legislative analysts do not focus on emissions. The Congressional Budget Office evaluates the economic impact of legislative proposals, but not emissions — and the historically conservative office has claimed the fiscal effects of climate change “will probably be small over the next 30 years.”

Rep. Joe Neguse (D-Colo.) has introduced legislation to begin the process of creating a nonpartisan office to evaluate the climate impact of legislative proposals — but the bill has not advanced in the Democratic-controlled House.