Democrats’ first stab at warning voters about the GOP threat to abortion rights could have the opposite effect.

Instead of mobilizing voters to support abortion rights, the DNC’s new digital ad campaign could mislead viewers into believing that the threat to abortion rights is still hypothetical and hasn’t fully arrived at their doorsteps.

Perhaps this messaging shouldn’t come as a surprise, considering Democrats knew for seven weeks that the Supreme Court was ready to overturn Roe, yet they appeared completely unprepared for the decision when it came down last Friday. So far, party leaders have not offered any national strategy to ensure that people in red states can get abortions, outside of urging Americans to vote harder and deliver more contributions to their campaign committees.

The DNC started running its new ad on Wednesday, five days after the court released its decision in Dobbs v. Jackson Women's Health Organization. So far, the ad has aired in Arizona, Florida, Georgia, Nevada, New Hampshire, North Carolina, Pennsylvania, and Wisconsin, according to data from AdImpact.

According to a press release, the DNC is putting five figures behind the digital ad as part of its so-called “MAGA Hot Mic” campaign. The Hill reported that the “ad buy will target 18- to 55-year-old women on Facebook and YouTube.”

A DNC spokesperson did not respond to The Lever’s request for comment.

The DNC ad first gives the impression that the Supreme Court could soon overturn Roe, despite justices already having done so. It leads with video of former Vice President Mike Pence (R) crowing: “We may well be on the verge of an era when the Supreme Court sends Roe v. Wade to the ash heap of history where it belongs.”

The Pence video is from last November. The Supreme Court has already tossed Roe, with support from a dark money group founded by Pence. It’s unclear why Democrats would use this quote from Pence given his prediction has already been realized — indeed, the ad could easily give some viewers the misleading impression that the court hasn’t actually overturned Roe yet.

Next, the ad pivots to warning that Republicans might try to impose a national abortion ban. This is a threat to be sure, but this ad is running in several states that already have abortion bans on the books, including Arizona, Florida, Georgia, and Wisconsin. With the dismantling of Roe, the threat has already arrived in these states.

Abortions are now mostly banned in Arizona, with no exceptions for rape or incest, unless necessary in an emergency to save a mother’s life, according to Republican state attorney general Mark Brnovich. On Wednesday, Brnovich declared the state abortion law is back in effect now that Roe has been overturned. 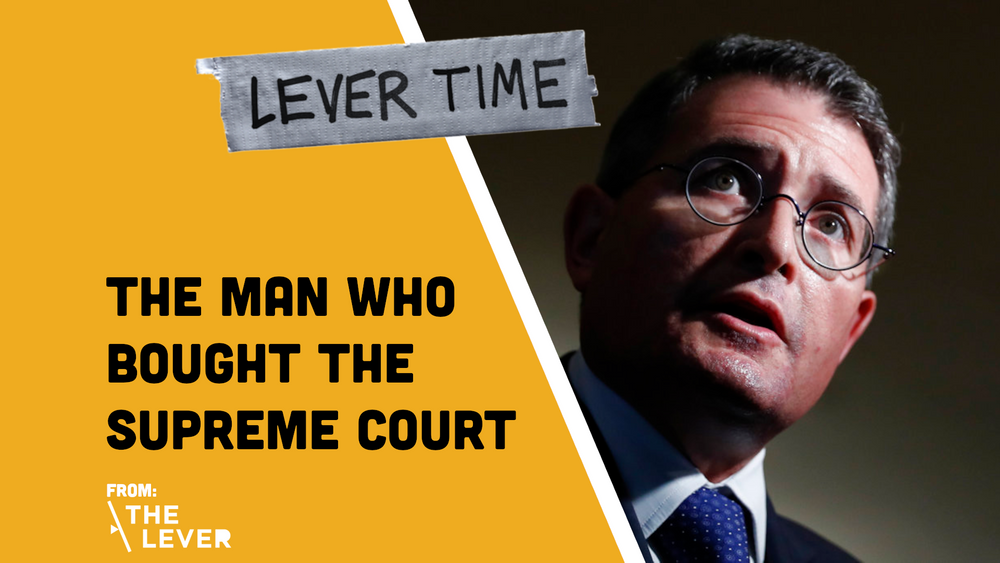 NEW PODCAST: The Man Who Bought The Supreme Court

On this week’s Lever Time: David exposes the dark money network that has been bankrolling conservative judicial nominees, speaks with lawmakers about how governments can protect abortion access post-Roe, and breaks down the upcoming Supreme Court case that could limit the EPA’s ability to regulate carbon emissions.

Wisconsin has a nearly 200-year-old abortion law on the books, which, similar to Arizona, makes no exceptions for rape or incest and only allows abortion to save a mother’s life. This law is now in effect since Roe was overturned. According to the law, doctors who perform abortions could face up to six years in prison and $10,000 fines. Clinics in the state have stopped performing the procedure.

Wisconsin Democratic Gov. Tony Evers and Attorney General Josh Kaul announced a lawsuit this week to block enforcement of the state ban, arguing that Wisconsin’s post-Roe laws conflict with the 1849 law, and that the ban has not been enforced for several decades.

"We're talking about returning Wisconsin to the 19th century. This law was passed well before women had the right to vote. It was passed before the Civil War," said Kaul in a news conference.

The DNC’s muddled messaging extends beyond its ad campaigns and into its media talking points.

On Wednesday, Wispolitics.com published a DNC press release in which a committee spokesperson said: “While Democrats work to ensure health care decisions stay between a woman and her doctor, Republican lawmakers in Wisconsin and across the country are signaling that bans with no exceptions for rape or incest are next on their extreme agenda.”

Such a ban is already in effect in Wisconsin.

The DNC used similar language in its Florida statement, saying that “Republican lawmakers in Florida and across the country are signaling that bans with no exceptions for rape or incest are next on their extreme agenda.”

Florida passed an abortion law in April banning most abortions after 15 weeks, including in cases of rape or incest. That law was set to take effect Friday, though it was halted by a judge on Thursday — at least temporarily.

The DNC ad is also running in Georgia, where Republicans passed a so-called “fetal heartbeat” law in 2019 banning most abortions at six weeks. The law, which includes exceptions in cases involving rape or incest or threatening the life of a mother, was blocked by a judge in July 2020.

Georgia Republicans are now requesting that an appeals court allow the law to take effect.

Fighting For The Underdog