Inside The Military-Entertainment Complex

The military quietly infiltrating a movie studio… the idea might seem like a fantastical plot from a film, but Top Gun: Maverick is a reminder that it’s all too real. The new blockbuster is the latest product of a shadowy Military-Entertainment Complex that few know about, but that shapes so much of what we read, see, and hear about the military and militarism.

Films are where this pro-military stealth propaganda system is most prevalent — even though it is barely disclosed to audiences.

For example, to help filmmakers pull off the Top Gun sequel, the Navy delivered up pilots, fighter jets and aircraft carriers, and even broke its own flight training rules to make Tom Cruise look as cool as possible. In exchange, the movie’s production team didn’t just pay $11,000 an hour in plane rental fees — they let the Pentagon help shape the film.

As noted in our most recent Lever Time podcast by University of Georgia Professor Roger Stahl, director of the documentary film Theaters of War: How the Pentagon and CIA Took Hollywood, open record requests revealed that military officials were allowed to make changes to Top Gun: Maverick, including ensuring that “key talking points” on topics like recruitment and foreign policy were inserted into the film. 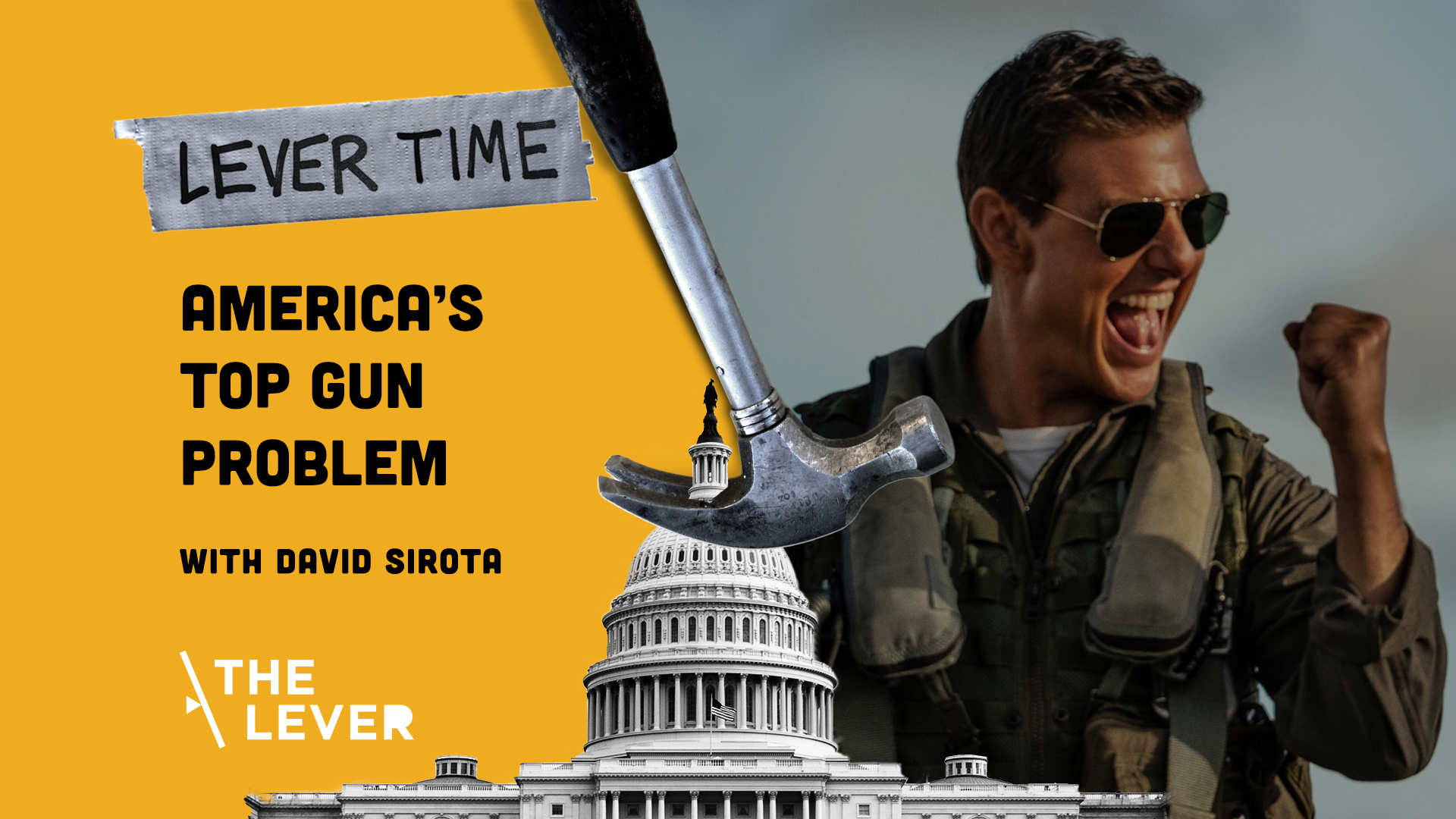 Now, to capitalize on the film’s success, the Air Force is running recruitment ads before screenings.

As a top military recruiter told Fox News, “We want to take advantage of the opportunity to connect not just the movie and the idea of a military service, but the fact that we’ve got jobs and we’ve got recruiters waiting for them.”

This sort of quid pro quo is nothing new. For decades, the military has been working hand in hand with Hollywood to help make promotional films and television shows — and deter the making of movies that question the military and militarism as an ideology.

The way it all works is pretty simple: The military’s film offices offer movie studios free or cut-rate access to bases, aircraft carriers, planes, and all sorts of other hardware. But there’s a catch: In exchange for that access, studios have to submit scripts to be line edited so that films are pro-military.

This demand has created a powerful dynamic in Hollywood. Getting access to military hardware at free or reduced rate prices is effectively a huge government subsidy to studios that agree to the military’s propaganda demands — and in some cases, the military has used that power to press filmmakers to distort American history.

On the flip side, being denied access means movies often don’t get made — because studios know they would be more expensive to make.

Military leaders have long understood the power of influencing cultural products — and doing so without disclosure.

“The hand of government must be carefully concealed, and, in some cases I should say, wholly eliminated,” wrote President Dwight Eisenhower in a 1953 letter, outlining his vision of influencing foreign views of the United States during the Cold War. “A great deal of this particular type of thing would be done through arrangements with all sorts of privately operated enterprises in the field of entertainment, dramatics, music, and so on and so on. Another part of it would be done through clandestine arrangements with magazines, newspapers and other periodicals, and book publishers.”

Eisenhower, a former general, was referring to government efforts to influence foreign views of the United States — but his vision also drives the Military-Entertainment Complex that imperceptibly sways Americans’ views of everything from military invasions to Pentagon budgets.

What follows is an excerpt of the chapter “Operation Red Down,” from my book Back To Our Future, which dives deep into this stealth propaganda system.

The military had been working with Hollywood filmmakers since 1927, when it helped produce Wings, the winner of the very first Academy Award for Best Picture. Pentagon involvement varied through the first two-thirds of the twentieth century, but it always had kids in its sights. In the 1950s, for example, the military worked with Lassie on shows that highlighted new military technology and produced “Mouse Reels” for The Mickey Mouse Club, one of which showed kids touring the first nuclear submarine. As investigative journalist David Robb discovered, a Pentagon memo noted at the time that child-focused media “is an excellent opportunity to introduce a whole new generation to the nuclear Navy.”

This ultimately peaked in 1968 when the Pentagon underwrote The Green Berets, a film combining John Wayne’s cowboy appeal to adolescents with a pro–Vietnam War message.

The 1970s saw far fewer Pentagon-backed war films for a public that was fatigued from Vietnam and its aftermath on the evening news. But according to The Hollywood Reporter, as Reaganite militarism began ascending, the 1980s saw “a steady growth in the demand for access to military facilities and in the number of films, TV shows and home videos made about the military.”

For that access, the military began exacting a price… Increasingly, for filmmakers to gain access to even the most basic military scenery, Pentagon gatekeepers were requiring major plot and dialogue changes so as to guarantee that the military was favorably portrayed, even if those unedited plots and dialogues represented the verifiable truth.

This was no real secret inside the film industry. In a 1986 Maclean’s report, military officials acknowledged that when directors came to them asking for permissions, the requests were being denied if those officials felt the armed forces weren’t being depicted “heroic enough in their terms.”

In a 1994 Variety story, the Pentagon’s official Hollywood liaison, Phil Strub, put it even more bluntly: “The main criteria we use [for approval] is … how could the proposed production benefit the military … could it help in recruiting [and] is it in sync with present policy?”

Pentagon-Hollywood collusion hit “a milestone” with 1986’s Top Gun, a triumphalist teen recruitment ad about the navy’s “best of the best,” who, of course, never even think to ask the most basic of the basic questions.* Set to Kenny Loggins’s unbearably catchy “Danger Zone” ballad, the narrative’s only pressing query seemed to be how many Vietcong planes Maverick’s dad blew away in the 1960s, and whether Maverick would get back his Mach-3 bloodlust after losing his buddy Goose to a military contractor’s defective cockpit door.

The movie’s glaringly incurious characters and story were no accident. The script was shaped by Pentagon brass in exchange for full access to all sorts of hardware — the access itself a priceless taxpayer subsidy. According to Maclean’s, Paramount Pictures paid just “$1.1 million for the use of warplanes and an aircraft carrier,” far less than it would have cost the studio had it been compelled to finance the eye candy itself.

As if that carrot-stick dynamic weren’t coercive enough to aspiring filmmakers, the Pentagon in the 1980s expanded the definition of “cooperation” to include collaboration on screenplays as scripts were being initially drafted. “It saves [writers] time from writing stupid stuff,” said one official in explaining the new process.

“Stupid stuff” was a euphemism for “stuff the military doesn’t like,” and soon Pentagon leaders were making explicit threats, such as the one the navy’s Robert Anderson issued on PBS.

“If you want full cooperation from the navy, we have a considerable amount of power, because it’s our ships, it’s our cooperation,” he said. “And until the script is in a form that we can approve, then the production doesn’t go forward.”

Such a cavalier attitude coupled with the box-office success of the Pentagon-approved Top Gun convinced studios in the 1980s that agreeing to military demands and, hence, making ever more militaristic films was a guaranteed formula for success. Consequently, between the release of Top Gun and the beginning of the Gulf War, the Pentagon reported that the number of pictures made with its official assistance (and approval) quadrupled, and a large portion of these action-adventure productions (quickly synergized into video games, action figures, etc.) were for teenagers.

Though many parents might have objected to such obscene Pentagon-Hollywood collusion, most had no idea it was taking place. Unlike the proudly Pentagon-financed-and-advertised newsreels made by Hollywood directors during, say, World War II, filmmakers from the 1980s on almost never tell audiences that they are enjoying military-subsidized-and-sculpted productions.* Viewers may think they are watching a purely commercial venture when they are often watching contemporary newsreels.

“Over and over [Pentagon] documents are full of statements where they are targeting children to be future recruits,” says journalist David Robb, whose seminal book Operation Hollywood examined the ties between movies and the armed forces. “The children and the people who see these films don’t know this is an advertisement for the military.”

The short-term impact of the military-entertainment complex was enlistment surges correlating to specific eighties box-office hits. As just one (albeit huge) example, recruitment spiked 400 percent when Top Gun was released, leading the navy to set up recruitment tables at theaters upon realizing the movie’s effect.

Today, the Pentagon offers Hollywood just as much enticement for militarism, and just as much punishment against antimilitarism, as ever. On top of the eighties militarism that is now endlessly recycled in the cable rerun-o-sphere, it’s a safe bet that whichever Jerry Bruckheimer or Michael Bay blockbuster is currently being fawned over by teen audiences is at least partially underwritten by the Pentagon, and as a condition of that support, these blockbusters typically agree to deliberately reiterate the morality of the military and war.

By contrast, it’s an equally safe bet that for every one of the few antimilitarist screenplays that are made into films, far more are reflexively spiked because their defiant content raises objections from military leaders, which, in turn, means no official Pentagon approval, no taxpayer subsidy, and therefore no movie from budget-conscious studios. As the director of The Hunt for Red October recounted, this new reality prompted studios in the eighties to start telling screenwriters and directors to “get the cooperation of the [military], or forget about making the picture.” Not surprisingly, that directive has fostered an insidious pressure for pro-militarist self-censorship among a whole generation of screenwriters.

“When you know that you are going to need the military’s assistance, and you know that they are going to be looking at your script, you write it to make them happy right from the beginning,” David Robb writes in Operation Hollywood.

Citing the pro-war tilt of the movies the Pentagon has approved in the last thirty years and the antiwar tilt of those the Pentagon nixed in that same time,* Robb poses a haunting question that summarizes the legacy of the military-Hollywood collusion in the 1980s.

LEVER WEEKLY: The Footnote That Says It All